I have worked on a range of installations and interactives for galleries, museums and public events and can act as designer, programmer and artist depending on the specific job. A brief selection of project is listed below, more information is available on request.

THE WILDING OF MARS


I was approached by the studio of Alexandra Daisy Ginsberg to design software for the Wilding of Mars Project. The project is described as follows.

Human dreams of colonisation are not limited to Earth. We see Mars, untouched by Earth life as barren, treacherous, beautiful; another planet to colonise. But humans invariably become exploiters. Instead, could we imagine Mars colonised only by plants, flourishing without us? The Wilding of Mars simulates the growth of a planetary wilderness, seeded with Earth life forms. In exhibition, a wild garden on Mars thrives over millennia, its growth visible over human hours. The pioneers are seeded in stages as conditions become more tolerable. The plants spread north from the South Pole, developing an ecosystem determined by global and local parameters of water, temperature, and nutrients.

I worked with Daisy and the team to develop a software simulation that would represent the possible outcomes of a martian rewilding. The project required a complex simulation that would calculate the spread of multiple species across a variety of terrains. My code took into account local environmental factors such as water, gas and soil nutrition in order to calculate the spread of thousands of simulated plant entities across the three martian seeding locations. Each species creates a ‘map’ of growth across the terrain and is also capable of mutating in ways that effect both its performance and its aesthetic form.

In addition to large scale aerial views each simulated location featured a close up view of successful plants growing in small scale local environs. The 3d models for these plants were generated from abstracted structural form data (stored in a similar structure to an L-System) which allowed them represent aesthetic mutations that might have occurred throughout the life of the species (potentially over millions of years). The origin (seed) species were structured as their real-world equivalents are, but over time these forms could mutate into new variant species.


The work shows different seeding locations on mars, with each terrain displaying both a large scale view of the current growth maps and smaller scale views where the individual plants could be represented.

A record of the evolved forms is output over the course of the simulation, storing the lifespan of species, their forms and their performance. 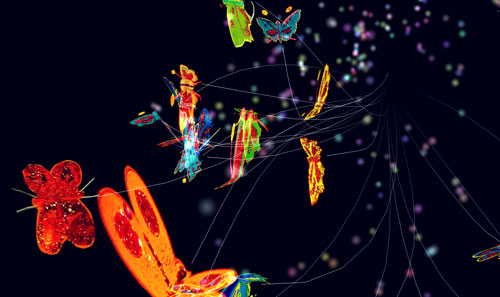 For this project I designed and wrote software that brought paper-craft made butterflies to life and then recorded each entity to a database. Visitors to the installation were invited to design their own butterfly on card in a series of craft workshops and the resulting paper models were scanned and trimmed by my application into a textures that were then used to generate 3d butterflies. These 3d versions flew around the workshop space (at the southbank centre and later at the millennium galleries) and the participants could find their own contribution fluttering amongst the growing flock. 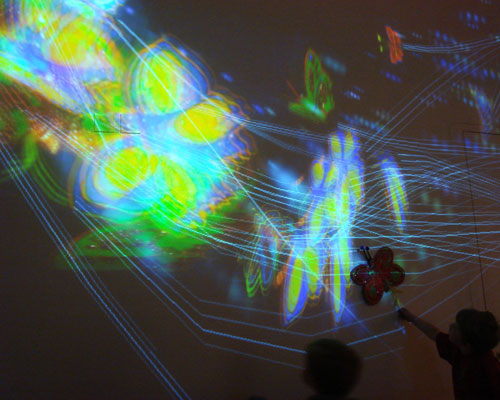 Each butterfly was linked to an id and QR code which could be returned to the exhibition and when placed in view of a local scanner would call the related butterfly back into the installation projector scene.

A later iteration resulted in over 1400 butterflies being created in 13 school workshops across South Yorkshire. Laura Mundy and Janet Jennings ran the workshops, producing a vast database of butterflies that were brought to life on data projectors during the workshops and then stored for later. After all the workshops had been completed where was an exhibition at the Millenium Galleries in Sheffield where children could bring their butterflies back to life in the installation by visiting with their original paper versions. 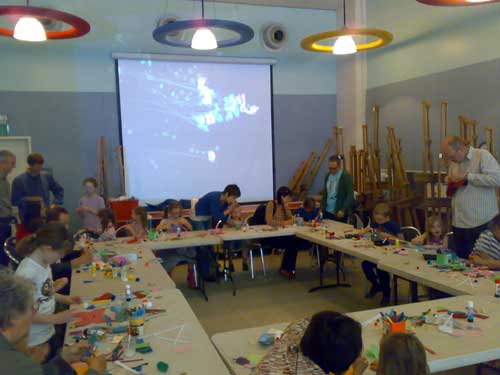 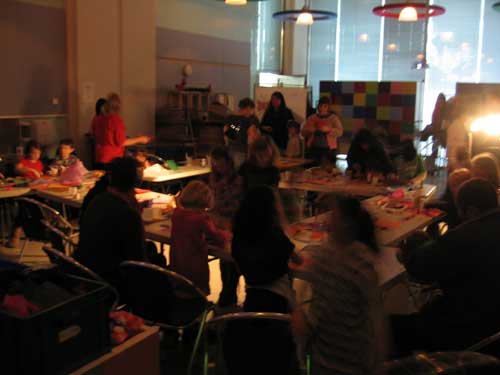 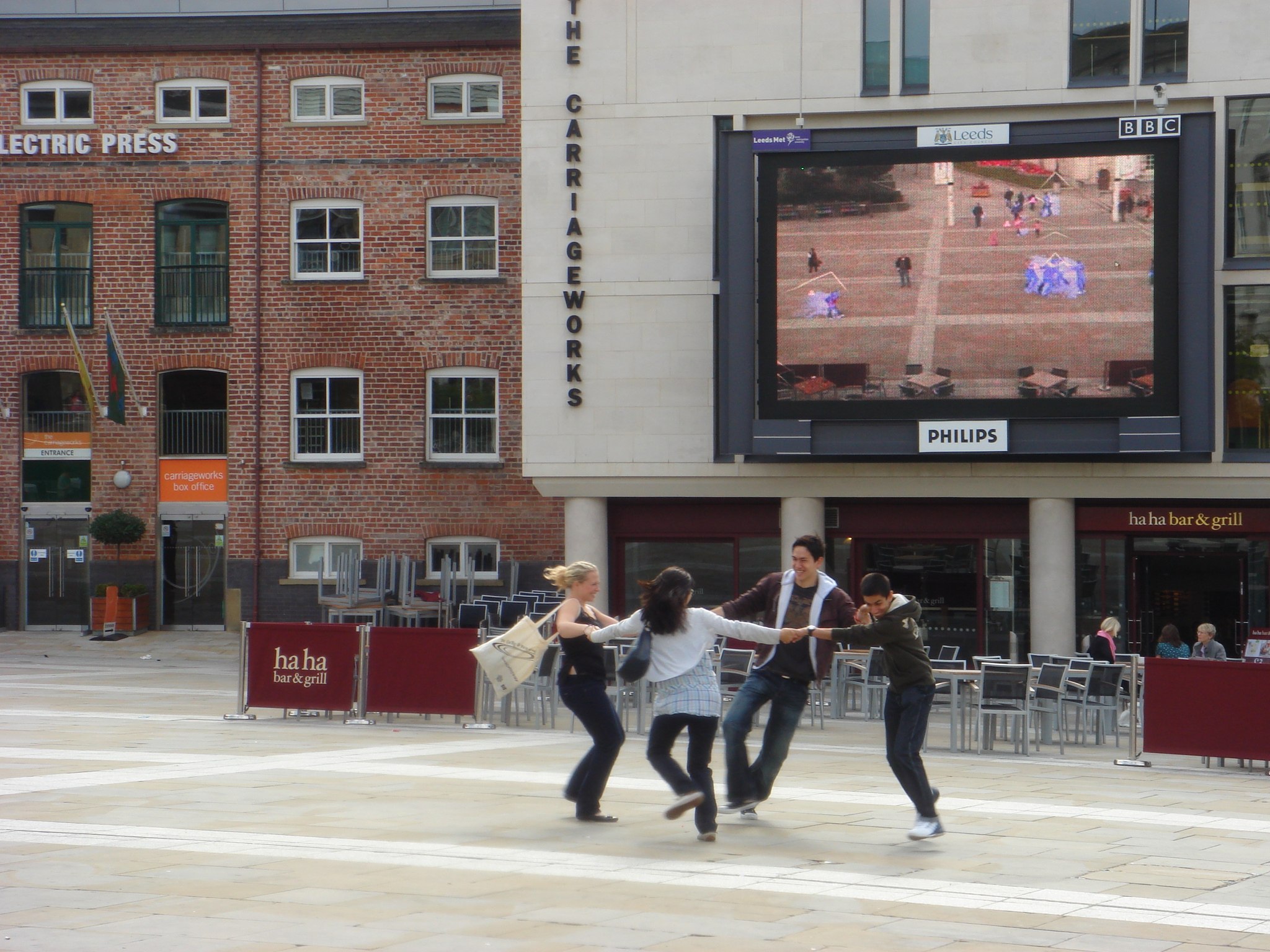 Untitled Application is an interactive sound piece commissioned by MAAP and SAM for the Leeds Expo. Its an open air work hosted on one of the BBCs ‘big screens’, a range of large outdoor LCD displays in major cities of the UK. The piece itself was produced for the LEEDs Expo, a festival of sound art.

The work is a two part application. The visual part is written in C++ using openframeworks and opencv. It takes a council CCTV camera as a video feed and performs a series of motion tracking, blob detection functions on the input. Audience movement is used to trigger simple graphic elements on the screen which are superimposed on the camera image. People can generate interactive patterns through their physical movement across the city square.

The second phase of the system is a synthesis engine written in PD (puredata) which communicates via OSC to the C++ application. When a person triggers an animation in a particular area of the screen a message is sent to the synthesis app which plays an apporpriate tone. The notes are selected from three sets of harmonic scales and underpinned by a phased/droning 4 note sitar stye chord. The notes themselves alter pitch and timbre depending on the players behaviour and the generative variables in the synthesis system. Each of the three tonal sets rlates to a specific graphic style in the visuals.

It’s been great to see people playing with the piece and working out how to draw/compose with bikes, buggies, wheelchairs, skateboards and even spacehoppers.